During the month of December, we recognize all that Rotary International and Rotarians are doing to combat diseases through effective treatment and prevention.  The pandemic of 2020 has certainly made those efforts even more challenging.  It was certainly no small task that RI decided to take on in 1985 when we pledged to eradicate polio. 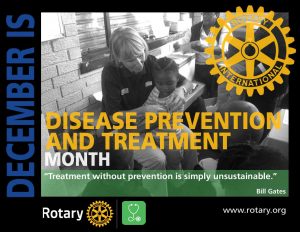 Only one infectious disease has ever been eradicated before: smallpox in 1979.  That was due to diligent vaccination and surveillance efforts; the same efforts that have bought mankind ever closer to the elimination of another devastating disease.  An amazing partnership between RI, the World Health Organization, the Center for Disease Control and Prevention, the Bill and Melinda Gates Foundation and regional governments is working to make this possible.  The advances made through those partnerships are also being applied to newer challenges such as the response to COVID-19.

Although infectious diseases continue to be a major cause of illness and death across the globe, they are not, or at least were not before 2020, the major health concerns for most developed countries.  Many people are still seeing their lives shortened by chronic diseases such as heart disease, diabetes and cancer.  Many of these conditions are not caused by infectious agents but are rather related to certain health behaviors and social conditions.  Rotary’s continued involvement in Disease Prevention and Treatment will thus need to be directed toward finding solutions to these social and behavioral determinants of health while continuing to fight against existing and emerging disease threats.  You as a Rotarian have been enlisted as being a part of that fight.

This entry was posted in Presidents Corner. Bookmark the permalink.